So after waking up in the yurt after an uncomfortable night's sleep we packed up early for a dash to Murghab where we should have been that morning and onto the border. We met An American Team Bruce Almaty and a South African solo team named Guy there, which was nice. We also took on an Israeli hitchhiker called Dal who was desperate to get to Bishkek by the 26th for a flight to India, which was the matched our itinerary. 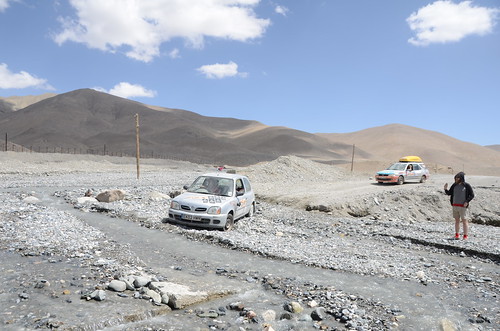 We were a bit nervous as we heard a couple of reports of challenging roads once we set off. We went through one after another fearing that was worse to come, and we were all surprised when we unexpectedly hit the border. The border was just a shack where it looked like a checkpoint that we've seen time and time again.

We struggled to pay the least possible bribe and eventually settled on $10 for both teams.

At this point we had a flat and another tyre had a bulge in the side the size of a golf ball, so we did the Pamirs with some scars to prove it. As usual we completed a major leg of the journey and it was an anti-climax. It is difficult to celebrate when you're exhausted and there is no champagne.

We pushed onto Osh and after some insane night driving where there was far too many animals and other dangers on the road. We checked into a LP recommendation Hotel Altai and it was absolutely abysmal. Nothing worked, not even in the taps in the room.

The next day we wanted to deal with the two tyres before setting off on the 10hr drive to Bishkek. We found the "Car (Machina) Bizaare" with the help of Team Bruce Almaty and we hoped we could get everything sorted in a bit more than an hour, in order to leave by midday.

Two hours later, blood, sweat, tears and ~30USD lighter we managed to get both done. What was silly was that the power for the block was out, so I to search out a place with a generator. It also didn't help the first second hand tyre we were sold had a massive hole in it. The next one was the wrong size, slightly bigger. We didn't notice until we drove off with it. So now when we hit a bump on the back right side, we can hear it hitting the wheel arch!

Nonetheless we moved on with Dal still in the back. It soon transpired we could not close on Bishkek, though we managed to find a pleasant hotel in Totagul on the way. Early next morning we aimed for Almaty.

After spending most of the night weeing out of my bottom in the absolutely disgusting, but thankfully en suite and functional (unlike the "shower" or basin) toilet of our room at Hotel Altai (I must appologise to the four other people sharing the room) I wasn't exactly feeling great. As I didn't think stopping every five mintutes for a toilet break was really an option I decided to take something to stop the diarrhea, and then we went out for a hearty breakfast, one of the heariest breakfasts we've had. Taking Imodium and then eating a large meal is not something that I recommend. As we looked around the tyre market in the heat and checked out a few prospective tyres I felt sicker and sicker. Really like the food in my stomach had nowhere to go. I just prayed that it wouldn't go upwards. Kai took the bulging tyre off to be changed and left me with the car. I got the punctured spare out and started the process of fixing it using the Crafty Plugger kit I'd brought from London, battling with a kid from one of the tyre places who thought, wrongly, that he knew how to use it better than I did. The sun beat down. I got a bowl out of the car and prepared for the worse.

Two days later and I have finally recovered. I swear I will never drink that fizzy yak's milk again. Though having said that no one else was fool enough to drink it, and they all came down with the same symptoms, at some point.