I'm tired, my contacts hurt, it's hot and I am eeking out Internet in the Grand Turkmen lobby surrounded by prostitutes.

After a long drive from Tehran yesterday, we stayed in Goochan. The next day we drove hungry to the border (no restaurants open on Ramazan of course). Luckily Jamie stopped to cook up some noodles from a side road in the hills. If we didn't I probably would have lost my mind later at the crossing.

At the border we bumped into a team from Iceland called https://mud-lab.com/. Before we were thinking we must be one of the last teams. On the top of the Iran side we bumped into "Team Tigers" and "Two random Germans" who have been stuck waiting for a Turkmen invitation for days. So it was great to feel that whole "Adventurists Mongol Rally" spirit again after a week in Iran.

The "Two random Germans" team asked to interview us which we agreed to, and after an hour or two of processing we met them to give an interview. Little did we know the Iranian official was waiting for us. He came over to us after a few minutes to say "come back tomorrow". My heart sank and I really though we might be trapped in Iran.

Don't get me wrong, I love Iran and it was a real shame that official decided to threaten us. Later he did let us cross.

Turkmenistan was almost more farcical than the Iran side. A ton of bureaucracy, expense (we are completely out of US dollars) and we were through. Unfortunately we had to tell them our route and later we thought this might have been a mistake, since we might want to do a diversion to Darvaza, to the "Gates of Hell".

Coming down from the mountainous border to Ashgabat was frankly incredible. At first one see a collection of modern-ish white building in the haze. As you get closer you see architecture that looks like it came out of Star Wars. Tbh I quite like the look, but it's just scarily unbelievable. I guess this might be like Dubai. Most buildings looked wholly unoccupied... ummm this doesn't make sense. [The heat of this city might mean that folks stay out of sight though.]

We drove in convoy with the Icelandic team and we were really worried about getting our car fined since it was dirty. There is just too much weird stuff in Turkmenistan for me to give it justice in this blog.

Over dinner with the Icelanders we remarked how odd if was to see a women's hair and legs (the Russian speaking waitresses) after sipping some Baltika no.7 and clinking some local Vodka. Iran had affected us.

I wanted to quickly mention we met another team called "Mongols to Mongolia" in the hotel restaurant which I found delightful. They are the first team of Mongolians doing the rally from London back to their home Mongolia!!

I have a ton of cool video and pictures to upload, but sadly despite checking into a recommended LP top pick with Internet. The internet is even WORSE than Iran (FB, twitter etc. are filtered also), which is a remarkable achievement. I really hope by Uzbekistan things improve, so we can share more. Also we have absolutely no roaming on our phones (emergency calls only), so please email us.

Good night... when I wake up... Believe you me it's going to be one of those WTF moments. 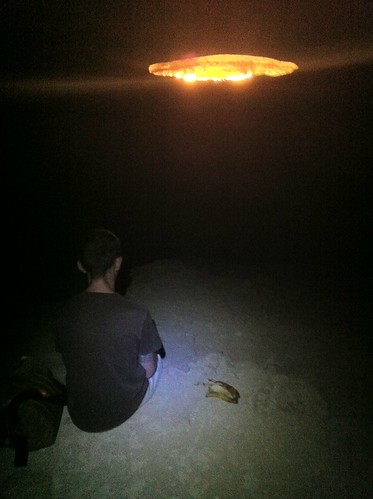 About 40 years ago, 300 odd kilometers north of Ashgabat in Turkmenistan some noxtious gases were seeping out of the ground at a drilling site. It was decided to burn off the gases and so they were lit. The ground collapsed, the rig fell into the hole, and the fire has been burning ever since. It's quite a sight, and tourists have been going to have a look ever since. Now apparently the Turkmen authorities don't like tourists, and I imagine the whole episode was a bit of an embarrassment, so they took the logical step and raised the local village, Darvaza, to the ground (leaving the bread oven standing due to religious reverance) to desaude visitors. It is against this backdrop that Kai and I left Ashgabat yesterday afternoon and headed north.

Driving 300km through desert is a thirsty business and by the time we got to what I assume had once been Darvaza, complete with lone bread oven and a handy wall to hide the car behind, we'd already drunk about half of the water we had with us. We also hadn't seen a petrol station since just outside Ashgabat.

Just before Darvaza, suspiciously close infact, had been a police check point. This panicked us a bit, hence the hiding of the car, and we decided to wait until dark and then walk the last three miles through the desert to the "hell mouth". Not quite as crazy as it sounds as Kai had already put the coordinates into his GPS device.

Walking through the desert was a little spooky. Kai claims he saw a snake, but it could have just been a moving stick

Gradually in the distance we started to see a slight glow on the horizon, and after climbing yet anouther ridge we saw... the moon. But all was not lost, there was definitely something else glowing out there. After a total of about an hour and a half we did eventually reach the great fire pit. It was nice, very peaceful and we scaled an overlooking hill and sat for a while.

While it was nice to see, and walking through the desert was an experience, I'm not sure I'd recommend it, or at least not the way that we did it. There is apparently a track that leads to it if you can find it, or you can try to find a guide, and you can camp nearby. As we returned and were getting close to the car we heard a motorbike behind us, which by the time we got to the car had caught up with is, and at just the same, as if on schedule, two other motorbikes drew up, from opposite directions. The riders seemed to want to take us on a tour of the flame pit. We tried to explain that we'd already been. They stayed and chatted and gave us some chewing tobbacco, which was a bit strong, and asked for gifts. Luckily we had some cigarettes and a pen and they left eventually.

So we set off from our pitiful campsite too close to the main road to Dervaza and drove back to Ashgabat. Since we left before 9am it wasn't so hot and the ride went quite quickly. Except for the 3 times we were stopped by police and the crazy 30km/h sign and the associated 15USD bribe.

Back in Ashgabat at midday we needed a break, so we decided to go back to Grand Turkmen Hotel and pretend we were still guests. We enjoyed to the pool, tried to use their internet and got some supplies from the Russian market opposite.

We then thought we should drive the 600km/s to Turkmenabat and get out of Turkmenistan as there seemed plenty more to do in Uzbekistan. We left about 1pm.

Unfortunately the road running east of Ashgabat was very poor indeed. We made slow progress as well as lost a hub cab, rattled and swerved the car through mountains and valleys of warped asphalt shaped by heavy trucks no doubt.

Finally we arrived in Mary (200km off our target) an hour after sunset. My impression of the time was surprisingly a very typical Soviet layout with a large square and a horrendous looking Soviet style hotel at one end. In the square we noticed a couple of busy looking restaurants and there we saw a red Mongol rally car belonging to Team America. We joined them and their Turkmen hosts for food and beer. [The food in Iran was really very disappointing, and boring. I can't count the number of times we had rice and kebab, and a grilled tomato if we were lucky. By comparison the Turkmen food has been very good, particularly on this evening when we were served braai-ed lamb with some very nice bread, which interestingly they call "naan" - Jamie]

The Turkmen have been very friendly though it's pretty hard for us to reciprocate when we are frankly exhausted and I speak very little Russian and none of their Turkmen language.

Next phase was the four us trying to find a hotel. I tried to argue for the more upscale one as I know that Russian budget options can be pretty fucking awful. I'd rather start on the high end and then take steps down. The one chosen was a motel a little outside town and thankfully a guy I met at the bar, Max, helped direct us there, by riding in the car.

The motel is quite a sight. Lots of trucks parked to the side. A dark tree/bush lined courtyard crawling with punters, pimps and whores. The room looked like a fight had occurred in it, judging by the broken fittings. [I know Kai will think I'm being pedantic here, but it really wasn't "crawling", I saw one prostitute. And the room was very tidy, not a fight scene. - Jamie] Nonetheless with the revered A/C on, I had a good sleep after the mandatory shower.