As that Queen song goes, it started off so well. We had made it out of Turkey without paying anyone to carry our documents from our car 10 meters to the check point, it was calm and relaxed and we hadn't seen any beards or even guns. We'd had to be a bit patient while they checked our passports, and then took our finger prints. Kai's for the second time as he'd already given them at the Consulate in the UK, I'd thought I'd gotten away with it after their machine broke, at the border we were back to old fashioned, reliable ink and paper. We then gave them the carnet, our car's passport, and waited some more.

We chatted with the officials, they seemed very interested in us, we showed them our Persian guide book on my Kindle (I'd previously removed Salmon Rushdie and made sure not to show them that it could still access Twitter and Facebook), they loved my tattoos, if laughing and pointing can be described as "loved".

One guard in particular became quite interested in our car, pointing at stuff and asking what it was. The first thing that sparked his interest was Kai's Gerber multitool. He pointed at it and said "Gift?" I explained that it wasn't mine. He then went to the back of the car and asked what the long red and blue bags were. I explained that they were chairs (£5 from ASDA), and he got one out, and sat on it, asking if it was made in England. He called Kai over and repeated the multitool-gift trick.

Kai searched for anything else that he might be happy with, trying to fob him off with some "expensive" Cafe Direct tea, the guard asked if it was made in England. Eventually Kai gave him one of his Geekout "KitKai" T-shirts, and he was very happy, asking again if it was made in England. A little while later our documents were ready, and we were asked for 20 Euros. This made me quite cross. I thought we probably could have driven off, but Kai didn't want to piss them off so I offered them 10, which was accepted. We were directed to customs, which we missed and were turned back from the exit gates. We went to a small green cabin, where we were given another slip of paper. We went to a manic building with one small kiosk window and absolutely no form of queuing system and worried that our documents had been lost somewhere. We went back to the green cabin and were asked how much we'd paid at the border. I was honest and we were asked for another 10 Euros. We handed over 10 Turkish Lira, about 5 Euros and were finally allowed to leave. 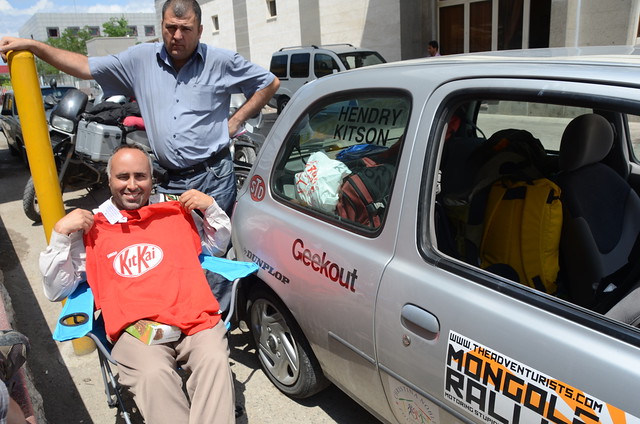